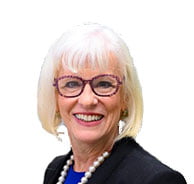 “Immigration law is very much a helping area of the law. As an immigration attorney, I am helping people during a life change. It’s rewarding to be able to help them through and humanize the process as much as possible. Immigration lawyers are advocating for something that our clients deserve. By doing what I do, I help to make a difference in people’s lives and put them into a position where they will frequently be able to take advantage of more opportunities.”

Kehrela started practicing immigration law in Los Angeles during the Iranian hostage crisis and witnessed the effects of political strife on immigrants’ lives as they began anew in the U.S. She saw immigration law as way to creativity advocate for a client within the existing legal structure. In 1993, Kehrela moved to London and went through the immigration process herself, which gave her a new perspective and increased her ability to empathize with her clients. After having the personal experience of maneuvering through constantly changing rules and regulations and updated forms, she understood what it was like to have to wait for a piece of paper that determined her future. One of the most rewarding aspects of Kehrela’s work has been the constant positive reinforcement she has received as difficult cases have been approved and new challenges conquered. Whether she is working with an individual or an employer, Kehrela is always concerned about what is best for each client with their differing needs and goals. With complicated cases, she has always loved being able to think outside of the box – not looking at cases straight on, but developing alternate strategies through creative lateral thinking.

In addition to her business immigration practice, Kehrela is involved in “Stop the Traffik,” a non-government organization that works to stop human trafficking, including child labor, sex crimes, and indentured servitude. The issue of human trafficking has interested Kehrela since she focused her master’s degree in education psychology on advocating for children, prior to attending Loyola Law School. Kehrela has also been actively involved in the Military Assistance Program (MAP) through the American Immigration Lawyers Association (AILA), which facilitates pro bono legal assistance for U.S. military personnel and their families. After working to organize the Rome District Chapter of AILA in 2008, Kehrela is now working on expanding the MAP program to military bases overseas and is a member of AILA’s national Department of State and Distance Learning Committees. She received a leadership award from AILA for her outstanding efforts in leading the Rome District Chapter, which was the first overseas chapter of the Association and took great perseverance to establish.